You Can Donate at Both Locations

The drop off area is behind both stores.

We can take furniture.  Please call ahead of time to see if we have room: 615-624-7812. Unfortunately, we can no longer pick up donated items. However, you can always drop off to us at either location.  Furniture goes to our Furniture store location: 1007 Dr Martin Luther King Jr Blvd in Murfreesboro.

According to data from the Environmental Protection Agency (EPA), textile waste has increased by 811 percent between 1960 and 2015. The majority of this waste is made up of municipal solid waste (MSW). MSW encompasses discarded clothing, as well as small furniture, carpets, tires, and footwear.

The EPA calculated that in 2015, clothing and footwear produced 11.9 million tons of waste and 4.5 percent of total MSW. Decades of data gathering evidence a dramatic increase in textile waste, which grew from 1.76 million tons in 1960 to more than 16 million tons in 2015.

The reality is that Americans still opt to throw away most of their old clothes, because it’s easiest to do so and/or they think no one would want their castoffs. On average, people get rid of about 70 pounds of textiles each year, with 85 percent of these old or unwanted duds ending up in the trash truck. That means we are collectively generating 16 million tons of clothing waste annually. That’s the same weight as 400 cruise ships! Only 2 million tons from this 16 million ton quantity are donated for reuse and recycling.

Learn How You Can Donate and Recycle For A Purpose Today !

Through your generous support, you enable ss to increase our Educational Programs by making them more available to schools, Youth Organizations, Individuals and Communities. 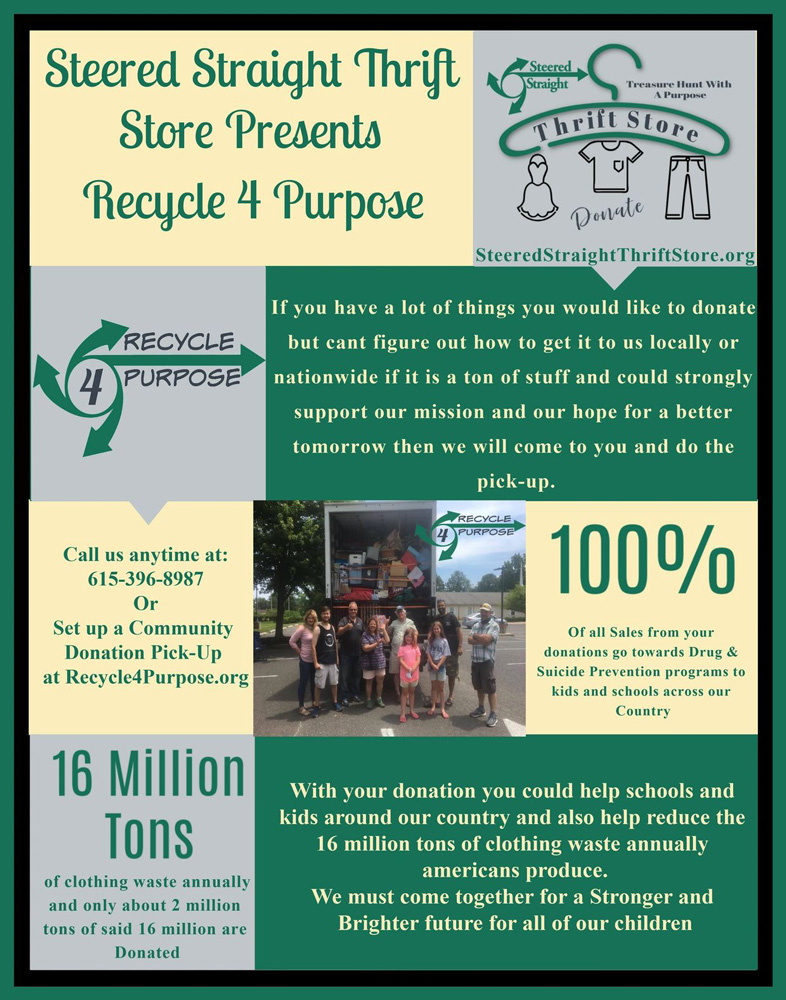 What Your Membership Donations Support

Steered Straight School Programs. We work hard to reach as many people as possible, in 2016 alone over 1 million youth nationwide have heard our message, resulting in the opportunity for those in a vulnerable situation to speak with our team or school counselors.

Any Noncash donations can be claimed at the end of the year. We have charitable forms or you can go to irs.gov/instructions/i8283.